Kathryn Solly provides an update on the developmental progress of her grandchildren, Emilia and Jack, exploring their relationships and communication skills, including the use of sign language.

It's a while since I wrote an update on the development of our grandchildren: Emilia, who is now four, and her brother Jack, 20 months. I started this series of articles as I was drawn to their development as dual language learners: they are growing up in a family where their mother and maternal grandparents are deaf. On her paternal side the German language is also an influence.

There are an estimated 70,000 people who know and use British Sign Language (BSL), so learning it naturally from birth like Emilia and Jack is a great asset. It is recognised that cognitive and language development in hearing children is consistently more advanced in those who learn signing from a very early age. It also improves eye contact and general understanding for everyone but especially those in the deaf and deaf/blind communities, as well as some with other unique needs. Society at large often finds it hard to make connections with disabled people so learning BSL would help this barrier to close. It could also help those who become deaf in later life as well as deaf babies born to hearing parents.

‘When you consider there are an estimated 70,000 people who know and use British Sign Language (BSL) then learning it naturally from birth as Emilia and Jack have done is a great asset.’

Emilia has grown much taller and has developed a strong but supple body. Her co-ordination has really improved, now being able to skip, trot, hop, change directions while running, and her enthusiasm has resulted in her gaining a medal in her first fun run. Climbing, riding her bike, ball games and swimming also remain areas of interest outdoors. In terms of fine-motor skills, Emilia can use scissors with great purpose and is writing lists and postcards, as well as labelling her own and family names confidently. Emilia is fascinated by tools and is given opportunities to assist her parents in tasks, such as dealing with a puncture on her bike and helping screw together some new decking.

Going on her six transition visits to school and meeting her 19 peers in the Reception class has been quite a challenge for Emilia emotionally as she leaves her small family nursery setting and brother behind. Once inside however, she is quickly engaged and comes out chattering about what she has done. The phasing of the visits by the school is sound and gradually adds new experiences each week. She has mastered all of the independence and self-help skills that are providing a sound foundation to her settling in when September comes. She is, however, very tired by the visits so I am reminded that a few years ago Emilia would have had up to six more months to grow and develop before facing the next steps in her journey.

Emilia's learning continues to prosper, and she can concentrate very well for 15 minutes or more. She is really starting to challenge us with some of her abstract ideas and understanding of concepts. This includes the number of sleeps until certain events and the difference between real and make-believe. She loves to sing and dance and is starting to explore different roles and responsibilities.

Feelings and behaviour are also an area of change and development as she is exploring and learning about how to express her emotions through talk, sign, gestures, drawing and making things. She loves to be around people and gets on well with a range of other children and adults. She is dealing with rules, apologising and is pleased when good things happen to herself and others. Generally, Emilia is very keen to help but when she is tired will be more demanding.

Emilia's spoken language and signed communication also continues to expand rapidly and she is now my ‘go to’ source to learn new signs. She will correct my attempts too!

She is a great thinker and observer of children and adults, often pondering what is happening. Then she will usually ask her parents in sign whether someone is sad, ill or cross for example as she seems to know that is a more rapid yet sensitive way of establishing what is going on without being audible to those involved.

It is quite noticeable how she adapts her vocabulary when speaking with Jack. She mainly plays the kind big sister but can be a bit bossy at times. She is gathering and extending her vocabulary and regularly asks for definitions of words she hears. Of course, this also means she can now argue her case far more effectively in situations where negotiation is required. She loves a joke and playing with words and sounds to make up silly songs and rhymes. When playing board games with an adult she is also fully aware of the need to be subtle when trying to cheat!

Life in the fast lane

I am regularly reminded of the teachings celebrated in Hundred Languages of Children: The Reggio Emilia Approach by our grandchildren. The holistic development of young children is what really matters to them and the wider areas of creativity, problem solving, critical thinking, imagination and physicality are all central, alongside personal, social and emotional development. In my professional capacity I also recently revisited Birth to Three Matters and was reminded what an excellent support and guidance document this is for anyone working with young children.

Movement is central to a toddler's learning and health. After all, you've just learned this wonderful skill, why would you not wish to use it experientially to explore high and low and to make meaning and connections? At 20 months, Jack lives life in the fast lane and is a very strong and active child. As a direct result, he's experienced a few cuts, bumps and bruises. He loves running and explores a variety of climbing apparatus in the garden and park, often copying Emilia. He confidently goes up stairs holding the rail but bumps down on his bottom, so the stair gates remain essential for his safety.

As he enjoys a sleep each day generally before or after lunch he then copes well during the afternoon and is far less fractious as a result. This nap routine is something he accepts happily as a result of stories and cuddles, so he associates it with pleasure rather than separation.

Jack loves balls and is quite able at kicking a football as well as throwing and catching. His aim with a variety of bats is also developing well. He still needs the buggy or some adult shoulders to ride on when tired but sets off on walks with the family dog with enthusiasm and energy. He enjoys his food and remains quite diverse in his choices, although like most toddlers he knows when he doesn't want to eat something.

Exploring the world is a big fascination for Jack who can really concentrate well when something interests him, such as building towers of blocks and demolishing them, as well as building ramps with his marble run to explore various trajectories. His love of pretend play is also very evident with his wooden train set, farm and wild animals. He is able to manipulate these quite well and can also vigorously mark-make with crayons and felt tip pens. On walks he loves to point out a variety of vehicles and is fascinated by the birds in his garden, especially the ‘fat pigeons’. He is clearly learning a lot from watching Emilia but also remains very curious about children around him and often will turn to me and sign ‘sad’ if he sees or hears a child crying. 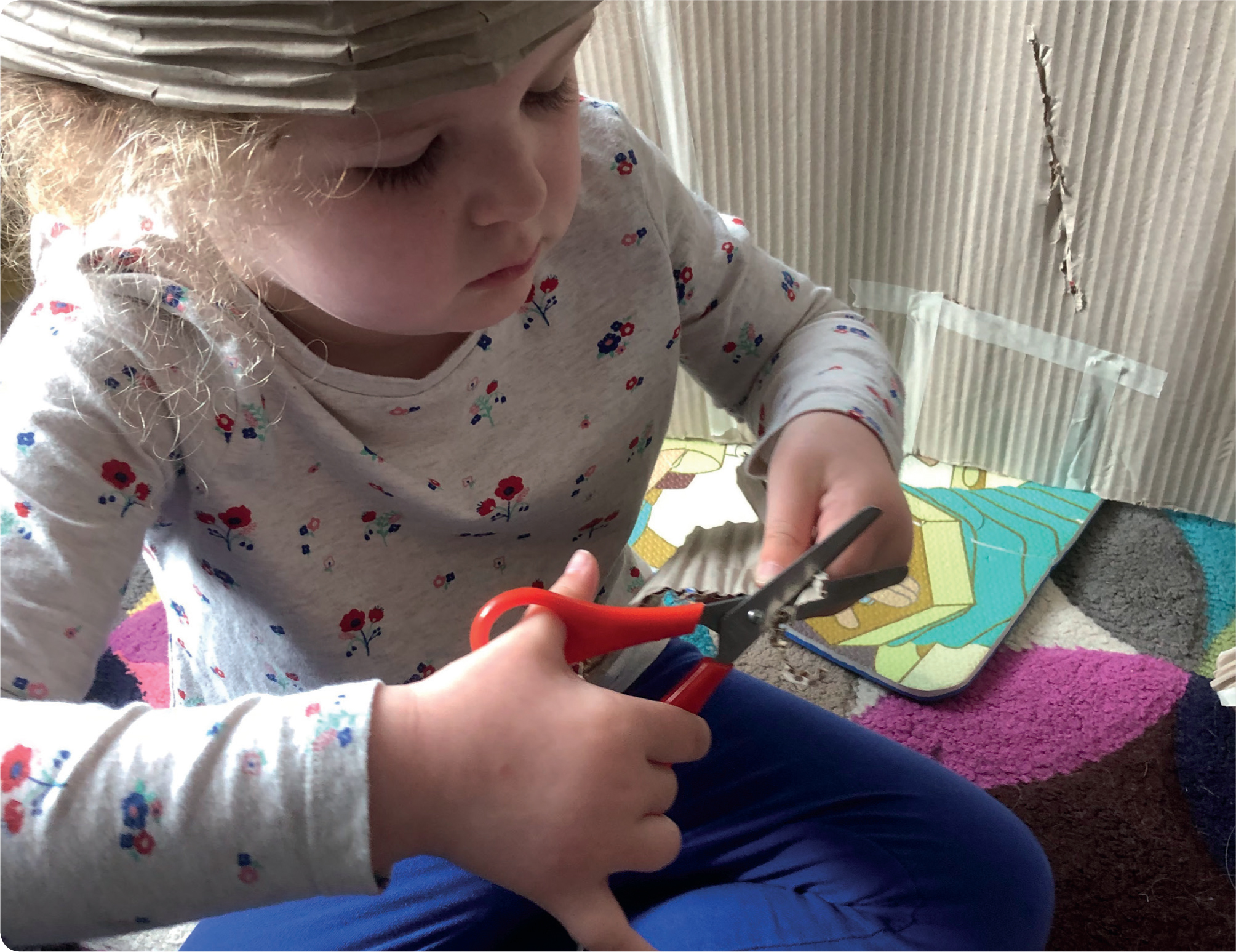 Jack is learning and using new words and new signs every day. The word/sign ‘no’ has also made an appearance as he tries to see how far he can test adult boundaries. Giving him a choice between things usually works well, while also teaching there are a few non-negotiables.

As his spoken and signed vocabulary is developing it is clear he understands many words. He is starting to join a few words together such as ‘go out’. His signed vocabulary and spoken vocabulary seem to be developing rapidly alongside each other although sometimes it is hard to understand what he is communicating when he uses both. He often collects items linked to stories we read such as keys, a bus or an animal, demonstrating his understanding. His grasp of conversation, simple instructions and questions such as ‘Where are your shoes?’ or ‘Show me your ears’ are also advancing rapidly.

Both children love being outdoors and in particularly making dens, gardening, birdwatching, and making mud pies and petal perfume. The snow and seaside thrill them and provide new outlets for their curiosity. As a result of their mutual interest in birds, their father took them to Slimbridge to see the wildfowl arriving in the spring migration.

Going to the cinema and theatre is also popular, with Aladdin the pantomime fascinating Emilia – Jack, meanwhile, promptly fell fast asleep. This year, she reliably informs me that she is going up on the stage to see Justin Fletcher (Mr. Tumble) in person. We will see….