The fourth part of this series linking maths and children's books focuses on Monkey Do! by Allan Ahlberg and Andre Amstutz. As the Monkey jumps from page to page, use it as an opportunity to teach children in your setting about positional language.

Monkey Do! by Allan Ahlberg and Andre Amstutz is the perfect picture book for introducing positional language. It's a rhyming story about a clever little monkey who escapes from his cage and causes chaos all over town. In the end, the mischievous monkey turns hero as he climbs a flagpole to rescue a stuck kitten. Monkey goes ‘Up the road. Down the lane. Through the trees. Home again’, squeezing through the open door of his cage to snuggle safely back in his mum's arms.

The text has a range of positional words, but the detailed, painstakingly drawn illustrations provide the most valuable opportunities for extending language. By sharing the story and engaging in the activities, children meet the Mathematics Early Learning Goal: ‘…use everyday language to talk about… position’.

After reading Monkey Do! together children draw a picture of Monkey in a certain position, for example: on somebody's head, hiding inside a shopping basket etc. They might copy an idea from the story or make up their own. Children tell an adult a sentence to match their picture and they may write some of the words. For example: ‘The monkey is hiding inside the post box.’

The tuff spot becomes a home for a small world zoo – there are plenty of ideas on Pinterest for how to set one up in your setting. Make a set of labelled picture cards instructing children where to put Monkey, for example: ‘up the tree’, ‘next to the penguins’, ‘inside the zebra enclosure’. In pairs, one child picks a card and tells the other child where to put Monkey, and then they swap.

Make four bingo boards, each with six squares. On each square draw a picture of Monkey in a different position, for example: on top of a table, under a chair, between two boxes – try to make the bingo boards as varied as possible. Make written positional language cards for children to match to their pictures – see the key words box for ideas. You can type ‘positional language bingo’ into a search engine to find existing children's bingo boards that could be adapted to fit Monkey Do!

Encourage children to pay attention to the details in the illustrations as you read Monkey Do! The illustrations are so intricate that children will make different observations every time they share the story. As children notice details, encourage them to use positional language. Say: ‘Can you see the kangaroo's baby? Where is the baby?’ If children point to the book and say, ‘Th ere!’ place the book face down so that they need to describe where it is: ‘It's inside the mummy's pouch!’

Help children to observe the minutiae in the illustrations: ‘Can you see another animal hiding on this page? Where is the animal? What else can you see?’ There is so much for children to spot: a tiny mouse hidden in the corner of a page holding a bowl with an apple inside, a plane up in the sky, a milkman climbing up steps to deliver milk, a bicycle balanced against a tree, curtains flying out of a window in the breeze and so on.

Stimulate children's interest through shared attention and encourage them to learn from each other by listening to ideas. Ask children to describe Monkey's movements as the story progresses, eliciting a range of different positional language by praising children's individual contributions. One child might say the monkey is swinging through the trees prompting another child to spot that he's swinging over people and vehicles below.

As you share Monkey Do! ask questions that stimulate children's thinking so they make predictions about what might happen next and begin to link cause and effect. When Monkey sees the zookeeper unlock his cage and then leaves the keys hanging loosely out of his back pocket, what do children think will happen next? When they reach the page where Monkey notices a joey in its mother's pouch children might be able to predict what will happen based on their knowledge of the story. They will link cause and effect – Monkey sees something, Monkey copies! 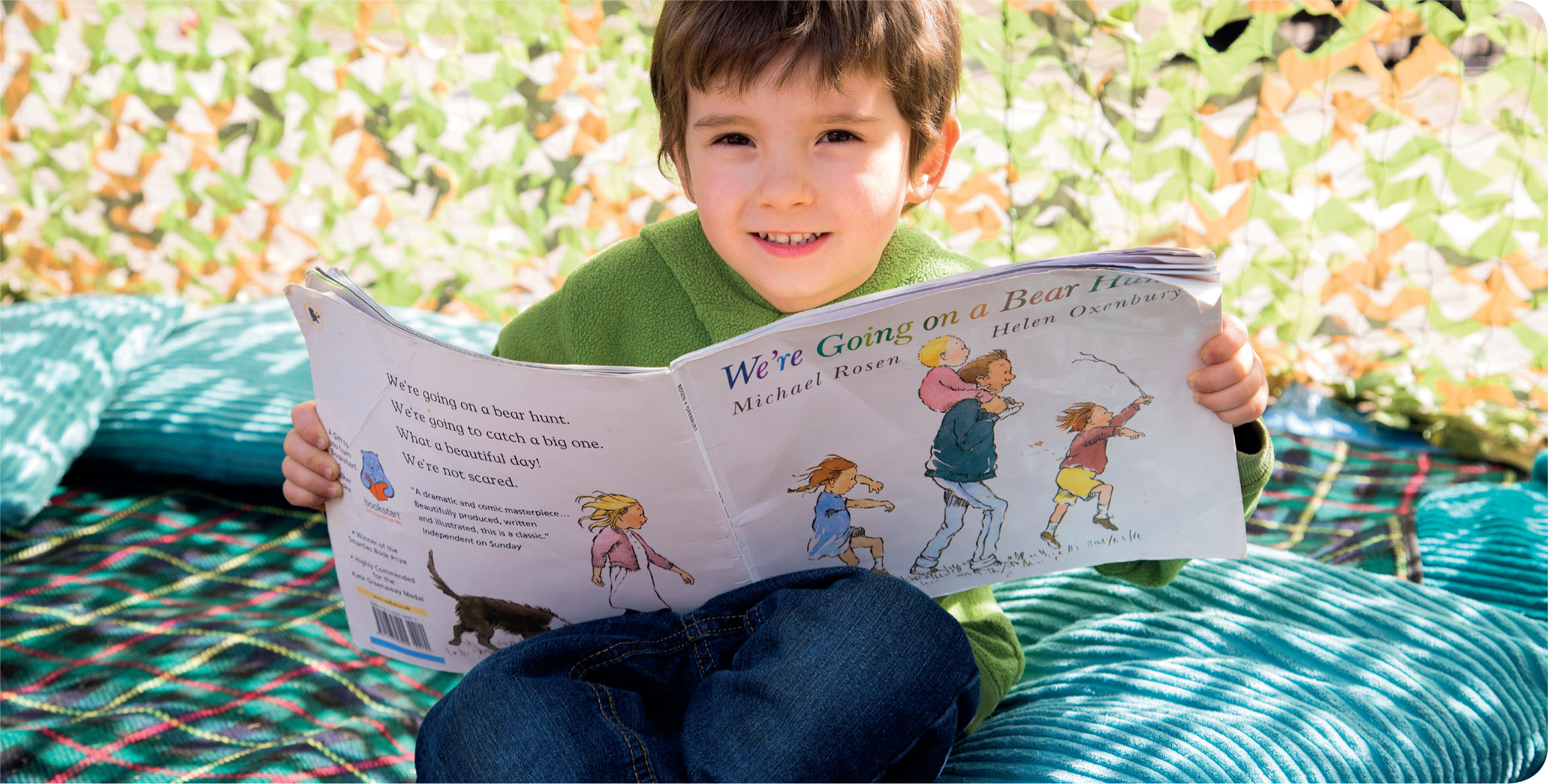 Encourage children to reach conclusions by drawing parallels with their own life experiences and prior knowledge. What do children think could go wrong for Monkey when he escapes from the zoo? They might think about the danger of roads, the possibility that Monkey might get lost, or the chaos that a monkey on the loose could cause.

Other characters and situations in the story also provide an opportunity for children to draw upon their life experiences and to link cause and effect. When a mother, Mrs Biggins, is in too much of a rush she causes similar chaos to Monkey – do children notice the similarity? Have children ever been in a rush or have they ever noticed anybody else rushing? What happened? At the end of the story Monkey returns to his mummy. Can children say why Monkey returned home? How do they think Monkey is feeling and how do they know?

On the interactive whiteboard children could play positional language songs such as KidsTV123, ‘Where's the Monkey?’ to reinforce vocabulary. Teach children how to play ‘Simon Says’ – they may independently choose to change Simon for Monkey once they are more familiar with the story.

Set out a range of picture books that use positional language along with props for re-enacting the stories: Rosie's Walk by Pat Hutchins, We're Going on a Bear Hunt by Michael Rosen, and Dinosaur Roar! by Paul and Henrietta Stickland. As children play, look for opportunities to elicit and model positional language. For example: ‘Where are you going to place that wooden block?’ and ‘Can you put your lunchbox on the trolley please?’

By listening to Monkey Do! children show that they meet the Communication and Language outcome: ‘Maintains attention, concentrates and sits quietly during an appropriate activity’. All the activities here involve learning and using positional language, so children are addressing the Literacy outcome: ‘Uses vocabulary and forms of speech that are increasingly influenced by their experiences of books’.

When children play Monkey bingo and On safari they meet the Personal, Social and Emotional Early Learning Goal: ‘…work as part of a group… and understand and follow the rules’. The Monkey bingo, At the zoo, and Monkey drawing activities give children opportunities to practise reading words with adult support and they may also attempt to write captions for their monkey drawings, meeting the Literacy outcomes: ‘Begins to read words…’ and ‘Attempts to write short sentences in meaningful contexts’.