Physical development: Carefully does it!

Through the lens of ‘in the moment planning’ Jenni Clarke outlines scenarios which maximise opportunities for children to challenge themselves physically. It is all about being spontaneous and guided by the child.

In the moment planning’ (ITMP) is about observation, seeing a teachable moment, interacting with children as they explore and investigate their own interests. The adult adult extends and deepens the learning at that moment, when it is relevant to the child.

As the learning is guided by the child or children, the adults need to be prepared to be flexible and observe the learning as it evolves – maybe into something very different than the initial moment.

ITMP involves documenting observations of some of the interactions after they have occurred to create a learning journey illustrating how and what the child learns and thinks. Settings often choose which children will have a written observation each week, so more time is spent playing with them than documenting.

Steps to putting the basics of ITMP in place

Three boys are playing a Spiderman race and chase game, which includes climbing up the side of ‘tall buildings’. They use the ladder on the climbing frame and one boy tries to climb using the short rope and putting his feet out, as if they are suckering to the building, but there is nothing to stick his feet to, and he only manages to jump and grab the rope and let go rather than climbing up it. He tries several times.

The adult thinks this may be a teachable moment – she knows that as well as enhancing their physical strength, developing climbing skills will extend their game and allow them to explore the ‘story’ they are playing in a more satisfying way. She has also noticed other children struggling to climb the rope over the past few weeks.

The practitioner comments on how tricky it is to climb a rope, even as Spiderman. She asks if the child would like to see a trick used in movie making. They watch a clip of a man walking up a wall, then the camera angle shifts, and they can see the wall was on the ground. The child laughs and wants to do this. The other two children run across to see what is happening.

The practitioner takes some videos of them ‘climbing’ along the ground and then she flips the video. She asks how they could do this with a rope. The children run off to get some ropes from the outdoor store. They problem solve how to fix it to the climbing frame making knots and pulling to make sure it is secure. They then ‘climb’ the rope, leaning back and using their hands to grasp tight and their game continues with a story line including lots of rope climbing and taking it in turns with the camera. They decide grass doesn't work so search for a way to tie the rope over the paving slabs. They explore different things and then make a longer rope and tie it around the washing line post. The practitioner places a box of chalk near the rope and they draw windows and drainpipes to climb up. 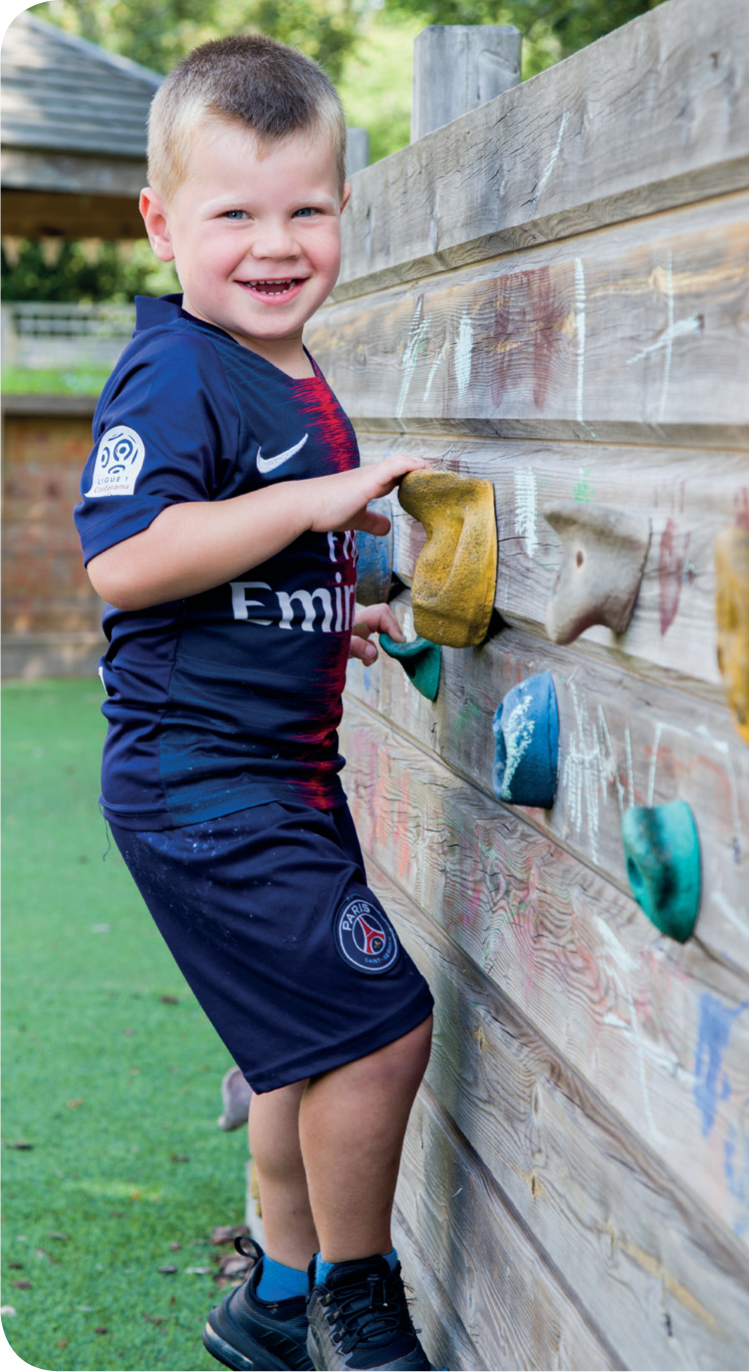 Organise different coloured ropes knotted at varying distances fixed to the climbing frame at the top and bottom, so they do not swing, some electronic timers and stopwatches and a large board with chalk for recording.

The practitioner wonders aloud what else they could use to make the climb more exciting. The children gather resources from around the outside area such as wooden planks, crates and tyres and experiment with making an obstacle course. They get more ropes and tie them around different climbing frame supports. The practitioner ensures the ropes are well fixed and the children explore climbing, using more effort to pull themselves over the obstacles.

One child asks if they could fix the rope over the mudslide hill. They secure it around a flagpole post on the top of the hill and take it in turns to climb up. Other children become interested in what is happening and join in being movie stunt superhero climbers.

Some of the children are having to wait for a turn and the practitioner asks them what they could do so they don't have to wait so long. They find more ropes and soon there are four ropes tied to the post and lots of laughter as they start to race each other to the top or bottom.

Rope climbing has now become the main theme of several games including pirates and mountain climbers and more children and adults are involved.

The pirates find some rope netting and want to add it to their ship (the climbing frame). A practitioner helps them to think of different ways to secure the rope net, they try ideas testing the strength by pulling until they find the safest option which is carabiner clips.

Some children find a rope ladder and want to use it and ropes to climb into the trees and the practitioner fixes them to a low branch. It's hard to climb the ropes but after some open-ended questions and experimentation with ideas they decide to make knots in the rope to use like steps. This involves doing some research into knots and finding the best ones to use. It is easier with the knots but the rope swings as they climb which makes it difficult, so they take it in turns to hold the bottom as steady as they can. They use this method with the rope ladder too and find it is easier if it is fixed to the ground. The practitioner encourages them to think about objects in the setting they could use to stabilise the rope and the ladder. They experiment and discover wooden blocks and tyres are best.

The fascination in climbing continues over the week and the play is shared with parents and carers. Some children go to a local climbing wall on the weekend and return eager to make one in the setting. The practitioner helps them to design low level steps next to a fence with crates and wooden blocks. The final design includes a rope tied into the fence in several places for holding onto as they climb along.

The focus has been on physical development, but the activities have been cross curricular and could involve more technology giving the children the opportunity to demonstrate the UTW technology goals: ‘Seeks to acquire basic skills in turning on and operating some ICT equipment. Completes a simple program on a computer. Knows that information can be retrieved from computers’.