A big interest in sharks, dinosaurs and teeth was a starting point and our inspiration. Through experience, I've noticed the children's engagement is extended when real objects are provided. High level engagement is seen when adults use ‘real’ objects to engage children through direct teaching.

To showcase the bone collection we have bones and books which support the artefacts arranged on shelves. A curiosity corner is created in a bright corner in the garden. On the top shelf, a muntjac buck skull, a sheep skull, pictures, and information on Muntjac deer are presented to show the differences in the face and body shape to the deer that they may already be familiar with. The book ‘The Street beneath my feet’ is available for the children to refer to and discover what's underground. The next shelf has shark jaws, a book and ‘funny bones’ story book. There are also chicken bones buried in soil to encourage first-hand learning and to show how some bones are found. On the bottom shelf, a basket filled with broken bones and a pony vertebra is placed next to a book on the human body. The set up includes both books on animal and human bones for the children to see the similarities and differences.

Th is invitation will be utilising multi modal learning, providing hands-on artefacts, written texts, pictures, and songs to stimulate the senses and embed the learning experience. The invitation is set up for nursery children aged three and above. A set of simple rules explaining about careful handling of the resources, taking turns, and listening to each other will be explained at the beginning. Children have shown a big interest in bones through books which sparked their curiosity. Some children already have some knowledge of the human skeleton and dinosaurs' skeletons.

Th is invitation may be a new experience for children who have not previously been exposed to ‘real’ bones. Being based in Central London, our children have access to a wide range of museums and learning centres. They will learn about similarities and differences between human and animal bones. Teaching children about bones that can be found many years later also introduces time and history into the discussion. Children may begin to develop an awareness of the past and an interest in the natural world. My setting is situated in an area where archaeological excavations are taking place, making it an excellent link/talking point about the area in which the children live in to build their cultural capital.

Scaffolding between adults and children and the use of tier two words linking to the resources will be used during conversations about the objects. Older children will be modelling knowledge and language to younger children, therefore, creating a sustained shared thinking environment.

The play in action (how it is implemented)

Due to the fragility of the bone collection, this will primarily be an adult-led learning opportunity. Your role will be to support the children with their questions and extend the use of language. Children may start building an awareness of the past. Your role will include being the listener and using effective language interactions, modelling speaking and listening skills. Allow children to observe first and make their own comments without interrupting their process of thought. As the adult you can support children by placing their words into complete sentences and repeating back appropriate language.

Children may naturally want to closely observe and touch the artefacts. Your role as the adult will be to model careful handling and explain the importance of taking special care of precious objects. Once you have their engagement, key vocabulary can be introduced with words such as: fragile, internal, facial, antlers, incisors, and canine. As children make comments, you could ask open ended questions, such as: ‘I wonder where you find bones or skulls?’ Or ‘can you tell me where you have seen bones before?’ Let the children's language flow and extend with descriptive language.

Th is will be a great opportunity to talk about our human skeleton and introduce the song ‘The Skeleton dance’, and also learn about the importance of moving and keeping active.

I sat next to the display and waited for the children to approach and speak first. Children were confidently making comments about the bones as they explored the display. ‘It's a bone because it's from a long time ago because it's old.’ I responded by saying ‘I wonder what it is?’. ‘A reindeer, it's a tiny reindeer’, she looked closely at the teeth and said ‘My teeth are baby teeth.’ I remarked ‘this deer has antlers just like a reindeer, he is called a Muntjac deer, and he is born with three baby teeth until he reaches two and a half and then his adult teeth appear.’ Another child was eager to comment, ‘I know, I did go to the museum, there were real things. They were still quite old.’ I pointed to the display trolley and said ‘We have ‘real things’ just like the museum.’ The child remarked ‘there were glass so you can see them but not touch.’ I replied, ‘So exciting for us to have our own hands-on museum, where we can handle the bones carefully.’

The antlers were getting lots of attention. Another two children were taking a closer look, one commented ‘humans don't have horns, reindeers do.’ I responded by saying ‘You are correct in saying reindeers have horns, there are also other deer that have antlers too’. Next, the subject changed to teeth. A child opened his mouth wide ‘when I was a baby, I had no teeth, my brother has a dinosaur tooth in his spy kit.’ By this time, many children came over and listened to the conversation between myself and the child. ‘Th at's interesting because I have a real dinosaur tooth in a tiny box.’ They showed fascination and were intrigued by the dinosaur tooth in a box. We spoke about different types of teeth and discussed how we have 32 teeth as an adult, the same as some animals. The collection of books were used by the children and they commented about pictures ‘this one looks like a dinosaur bone.’ Together we looked at the skeleton in the book and I pointed to the backbone.

Th en, I showed the children our real pony spine. I demonstrated how to bend forward and reach for their own back bone. When new children arrived, I said, ‘welcome to my museum.’ Most conversations were about teeth. They were interested in the shark's ‘spikey’ teeth and the wobbly teeth on the deer and sheep skull. One child remarked ‘the shark jaws are not wobbly, they are strong.’ We spoke about milk teeth and children shared their stories about their siblings' losing teeth. A child showed extra interest by saying ‘did you steal the skull from the deer?’ I explained that some of the bones were found in the countryside and others were from collectors of authentic objects.

One of the books showed fossils near a skeleton and a child confidently said, ‘that's a mollusc’ pointing to the pattern. I agreed that the pattern looked similar and thanked him for sharing his knowledge. This seemed like the perfect time to introduce my fossil collection. ‘I can show you real fossils, a good place to look for fossils is at the beach.’ A group of children passed the fossils around and guessed what kind of organism it was. We spoke about how fossils are remains of prehistoric animals and plants, and linked to dinosaurs being prehistoric too. Fossils have now been added to the ‘museum’ due to a child's comment. Other children have now seen fossils for the first time and have gained some knowledge.

The Funnybones book was popular, and three children said they had it at home. I read the story and the children eagerly commented who the skeletons belonged to. They requested the book to be read again and I then introduced the ‘skeleton song’. The afternoon was filled with children using complex sentences, recalling past experiences, and showing an eagerness to learn new knowledge, words, ideas, and information. 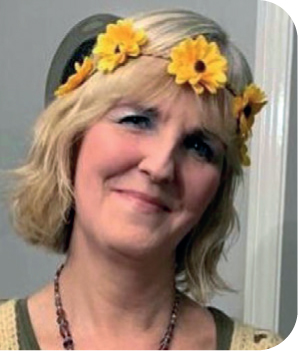