In this first edition of the new play experience case study we explore an open-ended art invitation inspired by the wordless story ‘Junk DNA’ by artist Clare Thompson. The story of ‘Junk DNA’ is told entirely through the arrangement of loose parts. 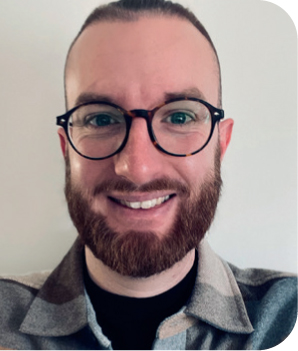 Arts and crafts, ‘creative’, ‘gluing and sticking’…are just some of the most common words/phrases used to describe ‘art’ learning opportunities in the early years. They often take the form of recycled ‘activity’ ideas that have been used for years to ‘inspire’ children's creativity, some of them offer limited room for the children to truly express and deeply explore their creativity and imagination.

This invitation however, is different. Clare Thompson has created some innovative and engaging transient art books. One is ‘The Gingerbread Man’, which is the popular folktale, retold through transient art using natural materials. My favourite however is ‘Junk DNA,’ a wordless comic which tells the story of ‘in the beginning there was nothing but the vast night sky… and a giant pile of junk! But the magic happens in one fateful moment…a few pieces fell from the pile and landed in just the right place to create a being.’

The story has been ‘created from the arrangement of recycled loose parts, including nuts, bolts, old scrap metal items, keys, spanners, spark bulbs, light bulbs, watch parts and torn paper.’ However, you can use any resources, metal or otherwise as part of your invitation. Alongside the loose parts I also include magnetic boards, these ensure each piece of the artwork created stays in place, and they enable the children to delicately move what are often extremely light and delicate loose parts without disturbing the rest of their image. Alongside this, there is also a copy of the book ‘Junk DNA’ for the children to use as inspiration of what they could create! 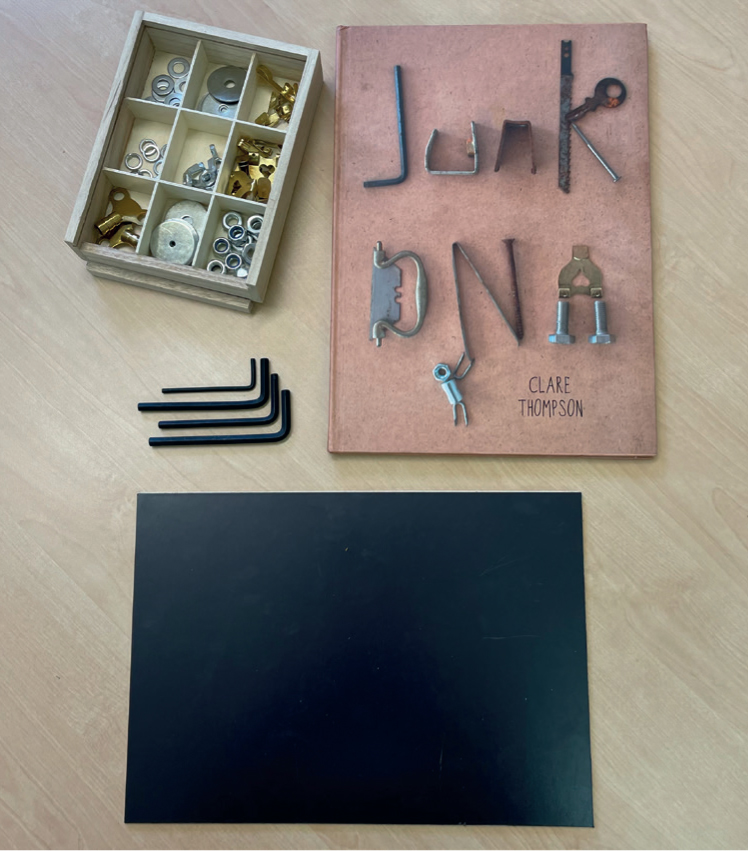 This invitation has been provided for children aged three and above. However, especially with this invitation, it is important to consider the size of the loose parts you are providing and the children who will be involved, as some of the items could be a choking hazard. Whilst the children within my provision do engage in imaginative and creative play, they do not tend to naturally gravitate towards what might be considered more ‘traditional creative’ areas of provision such as paints and ‘gluing and sticking.’ They do, however, have a love of loose parts, and one of the most accessed areas of our continuous provision is the loose parts shelf.

This invitation encourages children to explore a wide range of concepts, such as the idea of magnetisation. This concept is explored by the children from the very beginning due to the artwork being created by placing the provided metal parts on a magnetic board. As well as their knowledge of the scientific concept of magnetisation and recognition of metals, the children may also apply their mathematical knowledge by considering the size, weight and shape of the resources used and images they create, in addition to using their imaginative skills to create their works of art.

The play in action (how is it implemented?)

Your role within this play opportunity is key. As the adult in this child-initiated and child-led invitation, you are there to support, guide and facilitate the play, to support the children to understand how to use the resources they see before them and to enable them to tell their story as well as developing their knowledge and understanding of scientific and mathematical concepts. As the adult you could also document the story the children are telling through their art, whether this is via photographs or ‘story-scribing’ – noting down what they tell you as a running commentary.

The children's physical skills are being enhanced when engaging with this play too. Their fine motor skills, particularly the pincer grip, will be strengthened by the children needing to pick up and carefully place down the small pieces as they build their picture. Furthermore, the intricate nature of some of the art will support the children in developing their hand-eye co-ordination.

Another key part of the holistic learning from this invitation is the language, words such as: magnetic, metal, heavy, light, large, small, experiment and test are examples of some of the vocabulary that's likely to be used. These words could be introduced alongside open-ended questions, such as: ‘what do you think is made of metal?’ or ‘can you tell me about the story you have created?’. You could use these as conversation starters when engaging with this invitation.

The child whose play experience is photographed here was fascinated by both the book and the tray of parts as soon as she noticed them set up on the table. As we explored the book and discussed the images on each page together, there was one page that captured her imagination…the robot. ‘That's so funny’, she said before laughing. ‘It's a robot’, she then described the different body-like parts she could see. Next came the inquisitive questions; ‘What is this flat black piece?’, she asked. I responded by asking her ‘do you know what a magnet is?’, ‘No’, she replied. We then, using sustained shared thinking, discussed how magnets can be used to test if an object is made of certain types of metal and how this might impact the use of the loose parts on the magnetic board.

‘I will show you how this works’, I said. First, I encouraged the child to begin creating her picture by selecting some of the pieces and adding them to the magnetic board. She decided to make a ‘rainbow.’ When this was finished, we again reflected on how metal should stick to the board if it is magnetic and that we could check by picking up the board and seeing if the pieces stuck. This is exactly what we did.

As the child picked up the board and realised that her rainbow was stuck, the amazement, joy and wonder she displayed was beautiful.

Then she decided to experiment, ‘is this magnetic?’, she asked whilst picking up a different small piece of metal from the tray, ‘why don't you put it on the board and pick it up and see?’, I said. We then repeated this multiple times with different objects, ‘it's magnetic, they stick on, so funny it is!’, she said as she made a house with Allen-keys next to her rainbow. 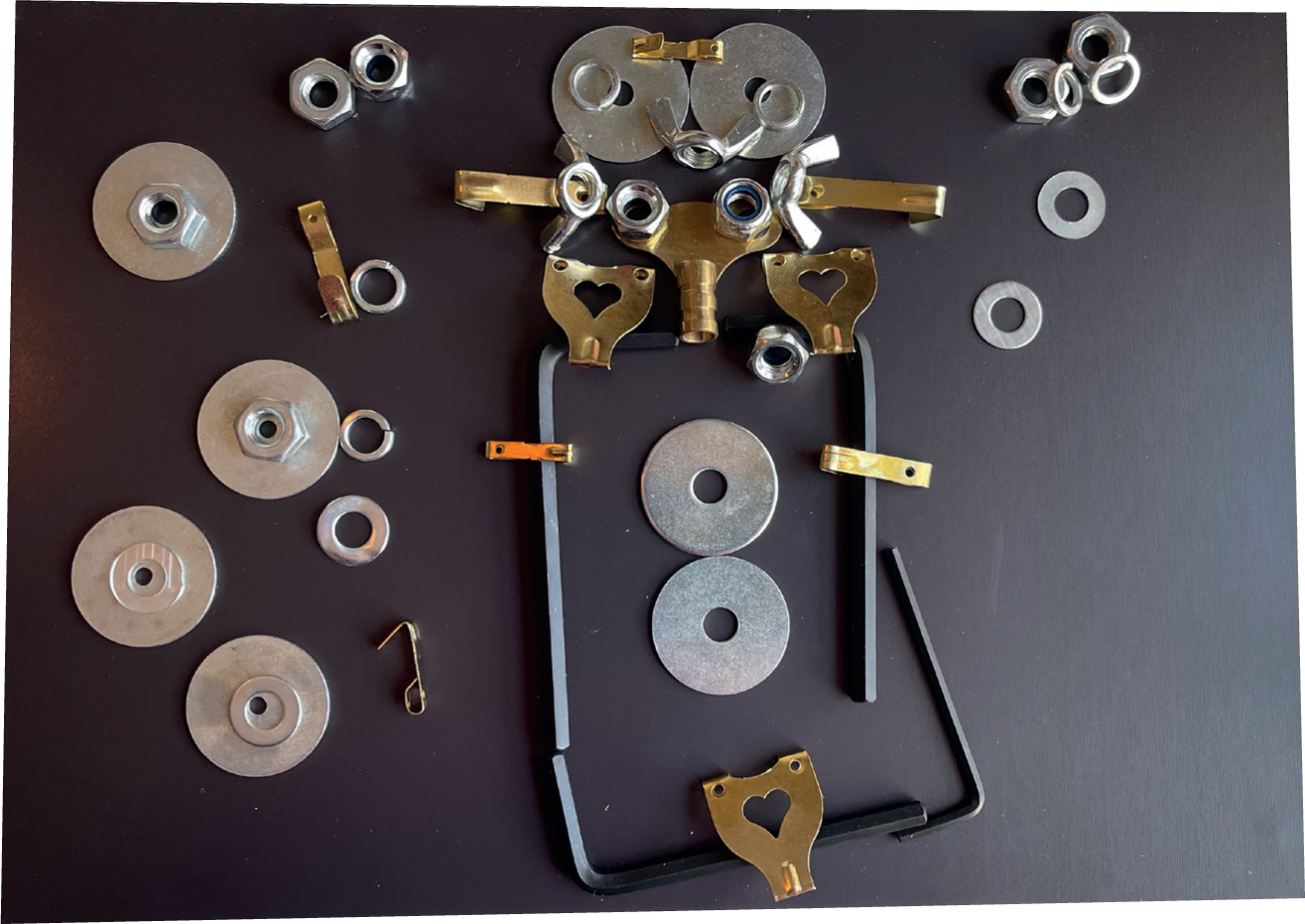 Characteristics of effective teaching and learning

This invitation may provide children with new experiences, ideas and concepts as well as supporting them in their natural desire to experiment with, develop and test their own ideas, whilst also encouraging them to make links between their previous knowledge and experiences, and those happening in the present moment. The children will also be engaging in imaginative pretend play when they are creating their art. They are likely to have to demonstrate resilience and build their willingness to keep on trying when they encounter the challenges of creating images using small and delicate materials.

Once she had tested whether all the different pieces were magnetic, she then decided to put them all away, start again and create a new picture. This time, she was creating her brother as a robot, she used the picture hooks as a heart and body, Allen-keys as legs and different size and shape washers for eyes, nose and the hair.

The engagement and learning that was experienced during this learning opportunity included what was previously considered in the intent and implementation sections, particularly relating to the mathematical concepts of size, shape and weight but also extended beyond this. For example, as the child progressed her play on from the invitation she wanted to use the magnets included in our continuous provision to further embed her newly developed knowledge of metals by moving around our environment attempting to identify metal objects. This exploration provided further opportunity to experiment and learn about a wide range of different materials. For example, we discussed wood and plastic as well as considering the power of magnets, for instance, we identified that some metal objects were too heavy for the magnet to hold them for a sustained period of time, leading to further discussions about size and weight.