Play experience case study: How many can you count?

This month's case study follows a child's journey whilst engaging with a mathematical invitation planned to further enhance children's knowledge of cardinality and their ability to subitise, as well as explore other mathematical concepts such as pattern.

This invitation for play has been introduced into our provision for a small group of children aged three to four years old. The resources included usually form part of the continuous provision across our environment, however, they have been set up together for the purpose of this play experience.

Our number tree contains the numbers 0-20, this is due to the mathematical understanding of this cohort of children, it can be reduced or extended where appropriate. One side of the small wooden disks contains the number symbol (numeral) and the other has the corresponding number of dots. In my experience I have found that a number tree is a more inviting way to display numbers than the more traditionally used number line, however, earlier this year I did introduce a number line for a period to support the children in their understanding of the sequence of number, for example the order in which numbers from 0-20 appear.

Alongside the number tree, there is also a couple of dice and a selection of small loose parts for the children to use when counting. 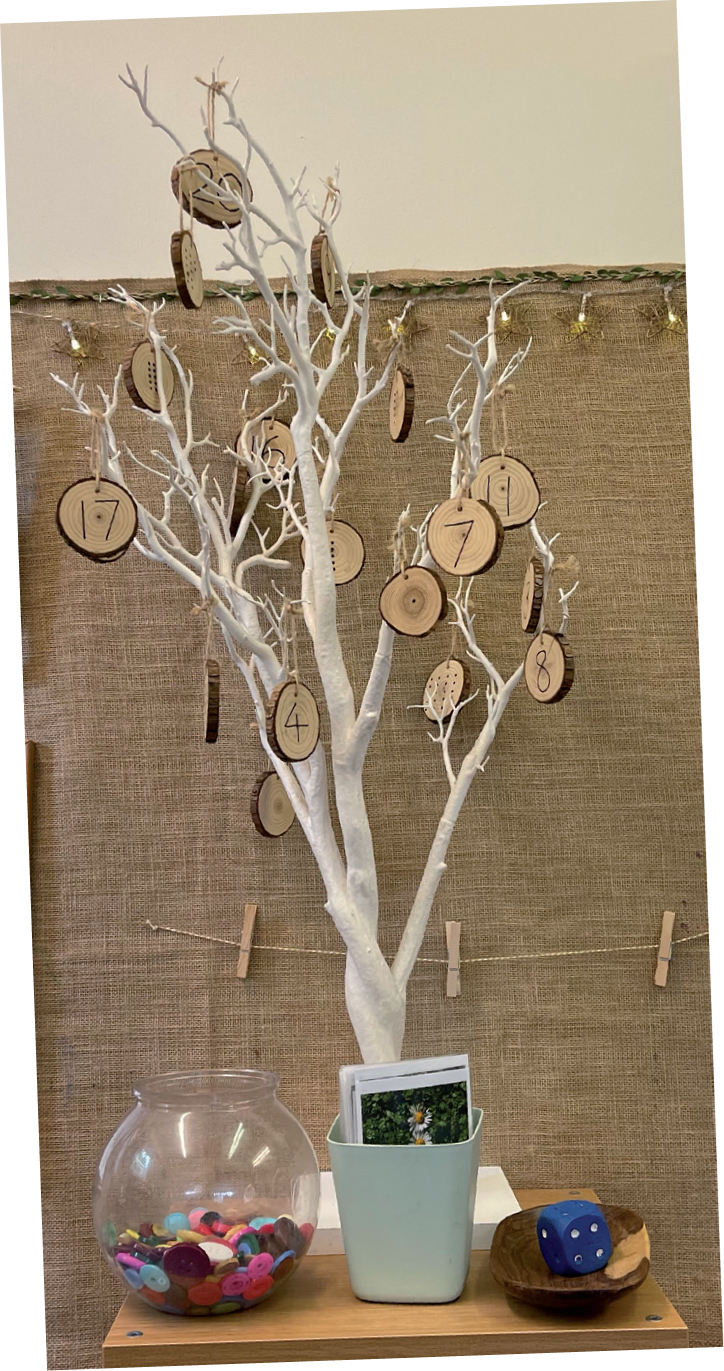 The children will build their understanding of a range of mathematical concepts including cardinality, subitising and 1:1 correspondence. These concepts are defined in the key terms box below, are considered vital concepts for a child's mathematical understanding and are included in Development Matters 2021.

The number discs support the children's understanding of cardinality as well as providing the opportunity for children to recognise the corresponding numeral.

The use of mathematical language is key. Whilst this language includes the concept names previously described, it is not limited to these, other examples of appropriate vocabulary you could use include: total, some, fewer, more, less, numeral names, more than, less than, quantity and equal to.

I have chosen to include the buttons because these allow for the most flexibility during play, as not only can they be used as objects for counting, but their size, shape and colour mean they can also be used to extend learning through the exploration of patterns if appropriate. 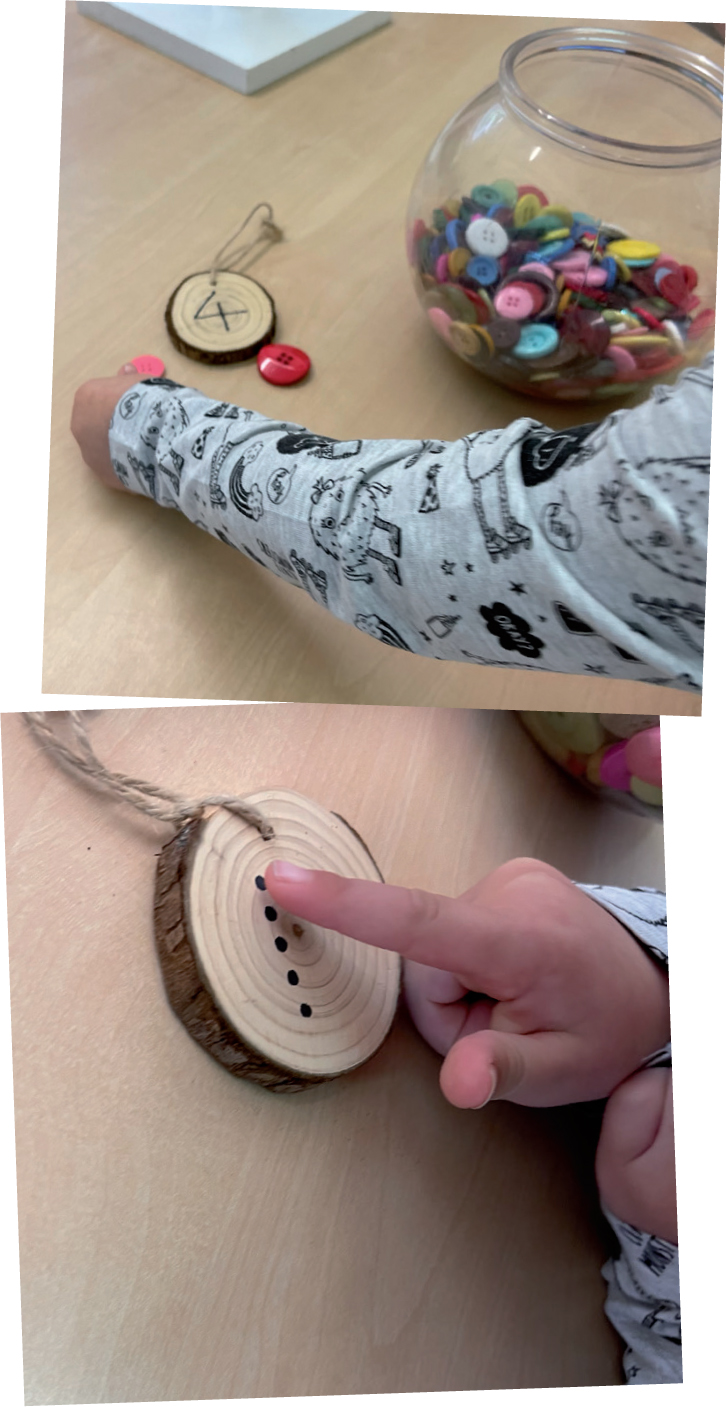 The play in action (how it is implemented)

Whilst this invitation is child-initiated and child-led, the level of adult support required will vary, dependent on the mathematical understanding of each individual child. The most effective way for an adult to build the children's comprehension of mathematical language and concepts is by modelling said language in context during play.

The play which develops from the initial invitation can vary significantly. It is extremely open-ended. This invitation allows for children to touch count objects using 1:1 correspondence, roll a die, identify a number and match it with the corresponding quantity, use two dice to complete basic maths problems such as addition, understand that the total number of objects is the cardinal number of the set, look at a small group of objects and correctly identify how many are in the set using subitisation and match quantity to the appropriate number symbol (numeral). 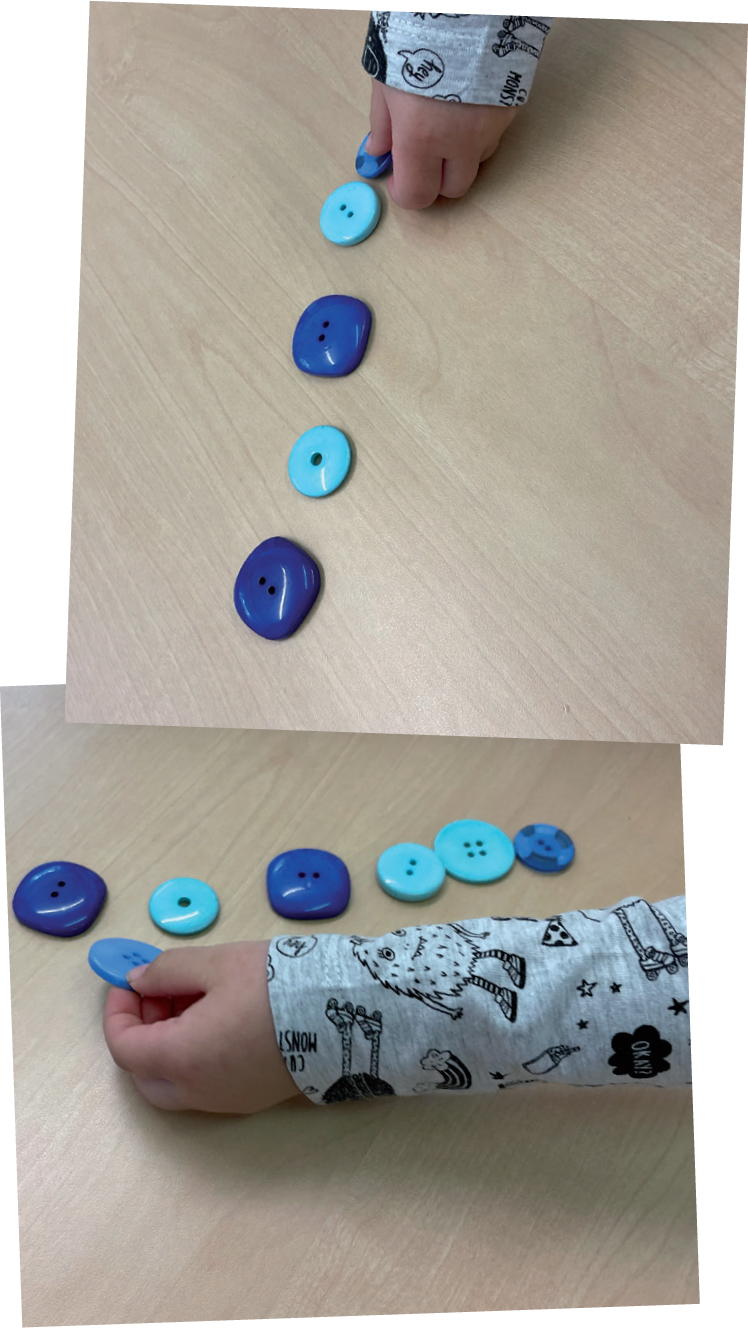 The play can be further extended to include patterns. Patterns play an important role in a child's mathematical development as they assist children to notice and understand mathematical relationships as their awareness builds. Using the buttons included the children could experiment with simple patterns. The simplest patterns for children to create are AABB or ABAB patterns. As the adult, you can take the lead on this in the beginning. You could use the buttons to create a pattern using the above sequencing, repeat the pattern at least three times, then encourage the children to try and copy this pattern themselves. Building on from that, you could create a pattern with purposeful errors and see if the children are able to recognise and rectify these errors. 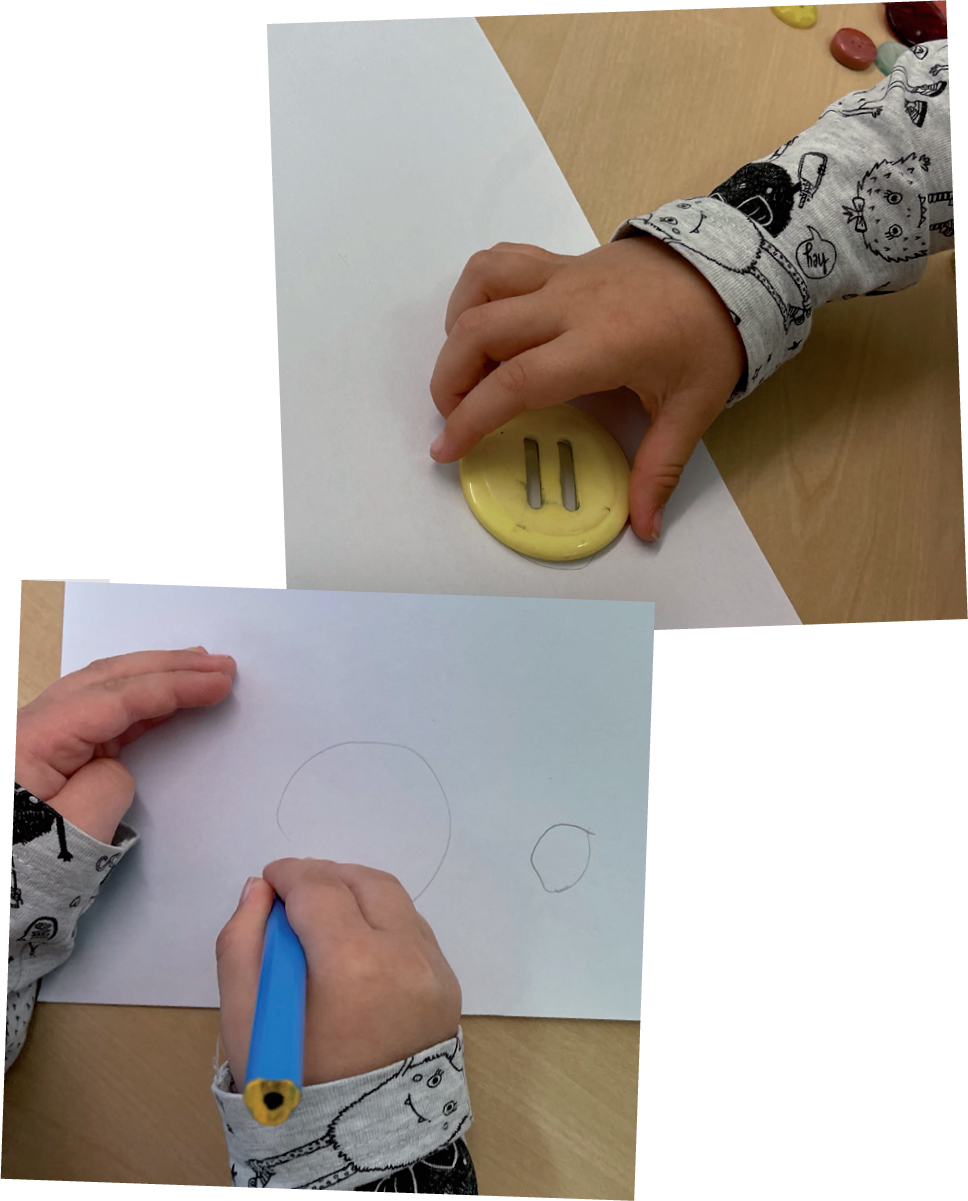 The children were drawn to the invitation when they first saw it, potentially because they recognised that the number tree had been moved from its usual position within the continuous provision. One child then began to get the buttons and line them up on the table, counting them using 1:1 correspondence up to eight. I was then able to support the child to have a look at the number tree and see if they were able to recognise the numeral for eight, we were then able to, using 1:1 correspondence again, count the spots on the disc to check whether the cardinal number matched with their line of buttons.

The child then took their play in a direction I had not anticipated, mainly because the child had not previously shown an interest in representing number in a written form, but that is exactly what they did. They said, ‘I am going to get some paper Adam, wait there.’ They then returned with a pencil and some paper and began to make marks on the paper to represent the number eight. Rather than copy the number symbol (numeral) they decided to draw small circles (to replicate the buttons) to make their own number disc. Then, using 1:1 correspondence they counted them (there were five) and got five buttons to match the quantity.

After repeating this pattern of play multiple times, with me there to support and guide them as we used the buttons and number discs to support the matching of quantity and recognition of numerals 1-13, I began to model a simple ABAB pattern with the buttons on the table. The child just burst out laughing, they said ‘that is so silly what are you doing?!’ I explained I was making a pattern and asked them if they could make their own pattern. They took my buttons and started to recreate the pattern in front of them, when they had used the sets of buttons I had used they decided to add their own, it took them a couple of attempts, with my support, to understand how the pattern I created worked, but once they had grasped the concept, they continued to make patterns for a prolonged period of time and even started to support other children in building their understanding of simple ABAB patterns too.

Below are definitions for some of the mathematical concepts detailed in this case study.

Cardinality – children who have developed a strong understanding of this concept are able to correctly identify that the last number they count is the total (cardinal) number of objects in a set.

Subitise – subitising is defined as the ability to recognise the number of objects in a group without needing to count them individually.

1:1 correspondence – sometimes called ‘touch-counting.’ The action of counting a number of objects one at a time, sometimes touching each object as you count.

Additionally, here is a reminder what is meant by an invitation/provocation and how you can identify the difference.

Invitation – an invitation is planned by a practitioner with the aim of introducing a new concept/experience to a child.

Provocation – a learning/play opportunity designed to provoke a child's thinking, which has been built upon an interaction with, or an observation of, the child.

Invitations and provocations can at times overlap. For some children it might be a learning opportunity which provokes pre-existing thinking, but for others it might be introducing a whole new idea/concept. This can mean that the terms are used interchangeably depending on the child who is engaging with the learning opportunity.

Characteristics of effective teaching and learning

When engaging with this invitation children will be provided with new experiences to respond to, in addition to supplementing their learning by bringing their own interests to the play. As the children develop their 1:1 correspondence, solidify their understanding of cardinality and their ability to subitise, it is likely that perseverance will be needed. Furthermore, the children will be encouraged to come up with their own ideas and make links between these ideas and other people's.